So I started doing this thing where I go out in the dark with my headlight on and work in the garden. The trouble is I can't get any good pics in the dark even with the flash on my Mom's awesome, but super cheap, camera.  So, I stayed up past my bedtime the other day and took a bunch of shots of the current state of the garden.  Let's start with the flowers:

The Cayuga viburnum is beautiful this year.  It smells good, too.  But not as good as the Korean Spice I didn't get a pic of before a storm tore up the blossoms.

Sometimes my second favorite daffodils make double flowers on one stem.  This one is particularly nice.  I planted about a dozen of these 6 or 7 years ago.  I'm always surprised when they come up again.

This is the stunning flower basket my Step-Mom got me at Mother's Day.  She is probably definitely the nicest person I ever met.

Gramma Vi's fern leaf peonies on the verge flowering once again.  These are my favorites because of the single flowers.
We planted this 'dwarf' lilac in the spring of 2009.  It's taller than I am now.  The bright chartreuse in the background is the Tigereye sumac that wasn't supposed to get very big.  Yeah.


My favorite clematis.  It's called 'Blue Bird' and it flowers mid to late spring before the other clematis even think about it.  We have many clematis in our tiny place.  One day maybe I'll do a blog post on them.  So pretty and so easy to grow.

My Lily of the Valley is almost in flower.  It's hard to believe that this plant started from a small gift from my Dad a few years ago.  He has a bunch in his garden and offered to let me take some home to mine.  I love it.  It is spreading most obligingly in the place under the other viburnum that I don't know the name of because it came to us mislabeled.  Anyway, the flowers love the morning sun and afternoon shade under my shrub.

The hostas are practically luminous in their shady spot.  I love the variety of plants available.  Who knew there were so many colors of green?

Next we move on to the fruit trees.  I haven't gotten many pics of them flowering this year.  We have had some wind storms that knocked the petals off.  Also, I work nights, so there is that...

The Red Rome apple tree flowered nicely this year.  It always looks so spindly to me and never seems to have many leaves.  I don't know what it wants or needs but I should find out.  It seems healthy otherwise.  My Candy Crisp apple tree had nary a blossom that I could see.  It has yet to produce a single apple in the 4 years since I planted it out there.  I'm not giving up.  It's healthy and growing nicely.  Even if it never gives an apple, it's still a nice tree.

Little, tiny, itty, bitty plum!  Lots of them actually.  Both trees flowered pretty well at more or less the same time.  This one is a Metheley plum that I planted from bare root two years ago.  You'd never know it was just a 4 foot long stick at the time.  The other is also a Japanese plum.  I think it's a Shiro but I'm not sure.  I'll know if the plums actually get to ripeness.  The year that I planted this tree, I planted so many plum trees that I've forgotten which is which.  I have a Santa Rosa, an Ozark Beauty, and a Morris at the other property.  I really should write this stuff down, huh?

This year, I'm giving in to the urge to try growing something tasty in the front garden.  So rather than get the neighbors riled up right away with a big patch of tomatoes, I opted for some more understated peppers and eggplants mixed in with some flowers in some nice containers.  If all goes well, next year, I'm putting in raised beds.

The final installment for today comes from the vegetable garden.  The best for last?  Probably not.  I can't really say.  I'm pretty biased all the way around.

I have Brussels sprouts, broccoli, and kohlrabi in this bed along with a few tomatoes, a couple shallots, and a bunch of onion sets.  I took the jugs off the tomatoes today.  The plants looked amazing!  I hope the storm doesn't hurt them.
I'm growing celery again this year.  Mostly because of the guy at Home Grown Veg on YouTube.  On a whim, I grew some last year and dried it for soups.  Home grown celery has so much more flavor than the bland stuff at the store.
What I'm calling the 'garlic bed' this year.  There's garlic for sure.  And peas.  And Walla Walla onions.  Also eggplant, leeks, beets, and the very first spinach I ever got to grow past a couple of leaves.


I must confess that I bought most of my lettuce and cabbages in these two pics as plant starts.  None of my lettuces made it past the first true leaf this year.  I'm not sure what I did wrong.  Better luck next year.  The best part about this is I discovered a couple of varieties that I really like.  But!  The Baby Choi is all mine from seed.  The first time I ever got it to grow this well.  I hope it gets big before it gets too hot.  Either way, I'm eating choi in my stir fry this spring!

This is the much sought after and prized Indigo Apple tomato plant.  It was a struggle that took three tries to accomplish.  But, I did.  I finally got several plants to grow and I thinned it down to the three best of the bunch.  I am super happy about these tomatoes.  I hope they grow well.  The one in this picture (taken 14 May2018) is about twice as tall 5 days later.
This is my very first kohlrabi from seed.  I've grown it from purchased plant starts.  But this year, I got it to grow from seed.  I am very excited about this.  I tried to grow the purple kohlrabi but it didn't make it.  I'm going to try it this fall.

The Mojito mint plant...or maybe it's Mint Julep mint.  I have both and the labels are long gone.  I should get those little copper plated labels for my perennials, huh?  Also, some parsley in the front and two of my tiny kale plants in the back.
Hope springs eternal.  I ran out of tomato room before I ran out of tomato plants.  So I'm trying them in pots again.  Really big pots this time.  These are my Rutgers and Zlatavas.  I also have a plant from some seeds I saved last year.  I got some rogue plants from a batch of 'Homestead' tomatoes that were clearly NOT Homestead.  They were, however, very nice small plum tomatoes perfect for stuffing!  I hope they grow like that again.  I have a lot of seed.

Some of the many pots of potatoes I have growing in the garden.  These are (I think) German Butterball on the left and Fingerling Salad on the right.  Maybe I'll go out and check for sure when the rain stops.

More potatoes in pots.  It's just about the only way I grow them anymore.

In the main tomato bed, I'm trying to grow them single stem style a la One Yard Revolution on YouTube.  Also, this is where I planted my Candy hybrid and Red Candy onion plants.

So many things are growing so well already.  I have about 10 blog posts in mind right now.  Stay tuned for more about tomatoes, peppers, potatoes, and maybe even clematis. But, first, I need to go out an cut greens for a salad.

As another of my YouTube garden gurus, Allotment Diary, says: Sithee later!
Posted by Lori "The Soil Whisperer" Guenter at 3:35 AM No comments:

Finally. I think it might finally be spring here in the Heartland.  So many things to do suddenly.

Like mowing the lawn.  I need to find the charger for my mower and make sure the batteries still work.

The really good news is I can finally start planting the gardens for the year.  We're scaling back a bit this year in an effort to maintain sanity whilst the changes keep rolling in.  Gearing up for a move and the demolition of the old homestead this summer along with planning for festivals and farmers markets has left me with little time for anything else.  So we scale back a bit.

Next year we hit it hard, I hope.

Anyway...here's a gratuitous pic of my onions-to-be.  Every year I try to start seeds. They sprout then die.  So, I go out and buy sets because I can't find plants anywhere.  Then I find plants and buy those, too.  I'm hopeless.  But I will have tons of green onions for the farmer's market, so there is that.

The onion plants in the front are a mere fraction of the whole bunch of onions I got.  I pick out the biggest and the best for nurturing into larger bulbs.  The tiny ones go in the ground for spring salad onions.  I have Red Candy, Candy Hybrid, and Walla Walla this year.  The bulbs are the standard big box store variety.


My seedlings are getting way too big to be in the house.  I will remedy that over the next week or so:

Some of the plants will probably not make it outside.  For example, this basil is getting big enough to harvest fresh for a meal.  At this stage, it probably won't harden off well and will sun scald or be stunted by the transplant so I'll direct seed some more outside. I might try potting them up to a bigger container and see how long I can keep them going in the house. 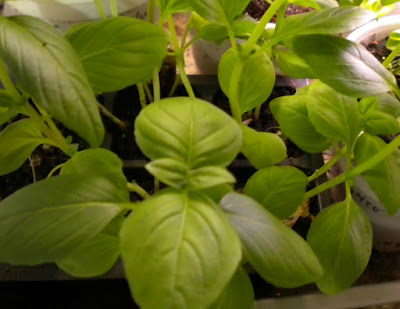 That's it from The Slice for this week!

Posted by Lori "The Soil Whisperer" Guenter at 8:47 PM 2 comments:

Yep.  It happened.  I'm officially going senile.  All this working the night shift has caught up with me and suddenly Saturday has transformed into Sunday in my head. 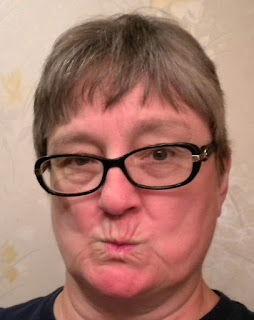 It's a shame, really.  I'm not that old, yet.  Although, I am turning 55 next weekend.  Lucky for me, I have a husband to set me straight.  Guess he figures he owes me one since I've been reminding him of the day of the week on a semi-regular basis for over 28 years.

Aw, heck!  I'm only a day ahead of myself.  Mom always said I was an overachiever. 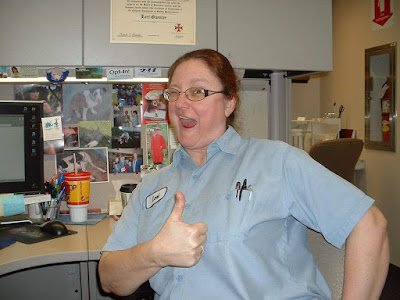 Posted by Lori "The Soil Whisperer" Guenter at 5:14 PM 4 comments: